Will climate change constrain China's development?  It's likely to do so in a number of ways.  First and most obviously the impacts of climate change, such as increasing droughts and desertification and more extreme weather events such as typhoons, could impact China’s development.  Second side effects from the causes of climate change, including air pollution from burning coal, are already having negative health impacts and a subsequent detrimental impact on the economy.  Third these pollution and weather/climate impacts could affect the political stability within China.  Finally the need to reduce greenhouse gas emissions may impose a cost on the economy and have international implications relevant for China’s growth.  I’ll explore the first points in this post, and the final point will be explored in the second part of this series.

Climate change impacts on China: Water & Food
On a per capita basis China already has relatively poor water resources and agricultural land.  China ranks 121 of 150 countries for per capita water availability (Shaojun 2011, p85).  China has 7% of the world’s arable land available to feed 22% of the world’s population (Paio S et al 2010) and half of the country’s land area is arid or semiarid (NIC 2009).

The problem of water shortage in China did not become evident until the 1970s.  Previously (in the 1950s and 60s) the problem of floods in China was more serious than that of droughts.  In the 1980s persistent drought, rapid urban development and urban population increase combined to push water demand in many areas above the limited, and in some cases declining, groundwater capacity.  In response many cities began to tap into the agricultural water supply.  This then pushed the agriculture sector to increasingly utilise underground sources, resulting in precipitous drops in water tables, and ground subsidence.  (Shaojun in Keeley and Yisheng 2011, p85 & 86)

Recent water scarcity in China has led to a wide range of ecological and agricultural problems, and has a negative impact on cities and industry.  Water shortages exist in 400 of the country’s 668 cities, and conditions are dire in 200 of these.  On average the annual industrial water deficit is 600 million m3, which accounts for the loss of RMB 230 billion (just under US$ 35 billion) worth of industrial output.  (Shaojun in Keeley and Yisheng 2011, p85)

The Economist (2010b) estimates that water pollution and scarcity are already responsible for reducing China’s GDP by 2.3%.  Xiaomin (2011) conservatively estimates water pollution alone cost the Chinese economy RMB 286.28 billion / US$ 42.5 billion in 2004 – or roughly 1.6% of GDP.

Shaojun (in Keeley and Yisheng 2011, p86) attributes the recent escalation in water stress to two factors.  First economic growth, population increase and a rising standard of living caused the national volume of water withdrawal and consumption to grow from 103 billion to 590 billion m3 between 1949 and 2008.  Second climate change has resulted in precipitation and temperature in the last 20 years becoming increasingly uneven between the northern and the southern parts of China, with the former experiencing more frequent droughts and the latter more frequent floods. 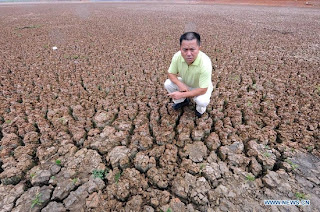 Climate change modelling indicates that droughts and dryness will increase even further – especially in already-dry areas.  And that increased precipitation and flooding is also expected as storms, including monsoons and typhoons, intensify (Dai A 2010; NIC 2009) and as landscapes affected by drought are less able to absorb water.

It is projected that by the time the Chinese population reaches 1.6 billion (currently 1.3 billion), China will be facing serious water shortage problems. (Shaojun in Keeley and Yisheng 2011, p85). 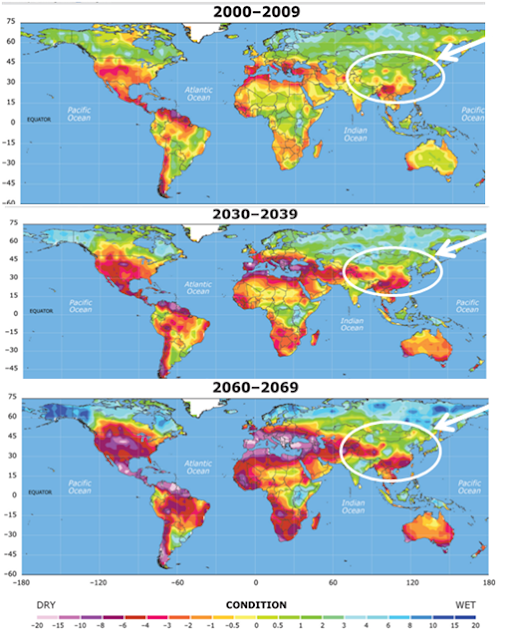 Source: Dai A, 2010.
The Chinese Government have recognised this climate vulnerability and are taking actions to increase resilience to climate change.  It is undertaking a mammoth engineering project in the South-North Water Project (NIC 2009; The Economist 2010b).  At $62 billion this project will divert 44.8 billion cubic metres of water per year from the Yangtze River in southern China to the Yellow River Basin in northern China, along the way displacing hundreds of thousands of people.  However recent droughts in southern China make questionable the assumption that this much water transfer is possible, and water pollution may render the water unfit to drink. (International Rivers 2012)  There is also a concern that this ‘engineering fix’ may simply perpetuate dependency on water from outside sources and act as a disincentive for recipient cities to learn to live within their means (Shaojun 2011, p93). 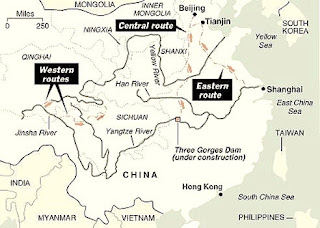 China is also implementing programs to increase water efficiency within farms (The Economist 2010a, Shaojun 2011 p88) and within industry (Shaojun p88) but it is hard to see how these efforts will be sufficient to fully counteract impacts at even moderate levels of climate change – let along the 3.5 to 6 degrees projected with current policy settings.

Recently China turned from being a net exporter to a net importer of food (World Bank 2008).  The US National Intelligence Council (2009) estimates that China’s agriculture output could be reduced 5-10% by 2030 due to climate change impacts.  China’s population is expected to grow at approximately 0.5% per year (World Bank in Google Public Docs, 2012).  In the context of growing global population and tightening global food production, it seems likely that China will have to divert resources away from economic development into paying a higher price for food.

This forthcoming water and food crisis could impact China’s social, economic, and political stability to a great extent.  Conflicts about water rights in the drought regions of northern China and farmers forced off their lands due to increased drought and the rising price of food may lead to social unrest. (NIC 2009)

Air pollution affects on China
China has the most polluted cities in the world (see the graph below).  Burning coal, a major contributor to climate change, is the single largest source of airborne pollution in China (Yushi 2010, p5).  300,000 people in China die prematurely from air pollution annually (Economy 2004, p 85).  In the most polluted cities, when children breathe, it is the equivalent of smoking 2 packs of cigarettes per day (Economy 2004, p 85).  The economic cost of this pollution is substantial, the World Bank (2007) estimates that the burden of premature mortality and morbidity associated with air pollution was 1.16% - 3.8% of GDP in 2003.  Roughly 1-2 times China’s military budget or 3-9 times China’s social welfare and pensions budget. 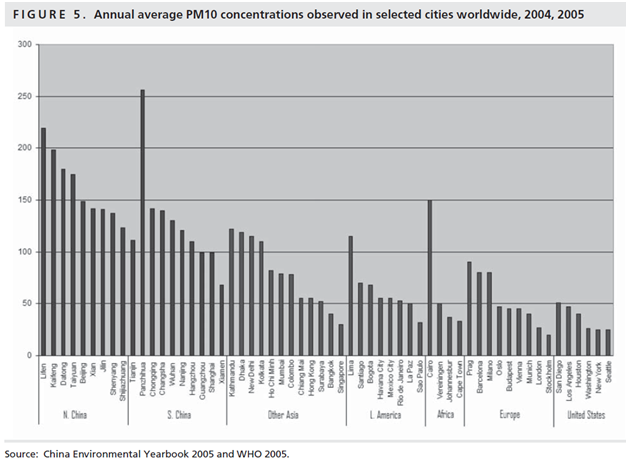 Climate/environment link to civil unrest
Economy (2004 pp221-256) draws parallels with other autocratic societies, including in Eastern Europe, where the environment was used as a basis for social unrest and notes that damage to public health, which is related to climate change pollution, is one of the chief sources of environmental protests in China.  Economy believes that it is no coincidence that the number of large-scale protests tripled in the period 1998 to 2000 to 170,000 (Economy 2004 p83).

An additional source of social unrest could come from water shortages (NIC 2009) and food shortages which could result in further and escalating civil unrest.  The Arab Spring can be seen as a precedent for this, where high food prices contributed to the circumstances conducive for social uprising (Lagi 2011).

According to the NIC (2009) social stability is China’s top governance priority.  The Chinese Government are concerned about the growing public unrest.  Toy (2007) reported that the World Bank reluctantly censored a report revealing that 750,000 people died prematurely every year in China from pollution-related disease because Beijing officials feared it would provoke "social unrest".  Concern about social unrest may have led the Chinese Government to subsidise food and energy prices, which otherwise would have increased substantially, in 2010 (Brown 2010).

Will climate change constrain China’s development?
Climate change will have a substantial impact on China’s ecology, its economy and on Chinese people.  Already a country with relatively low water resources and small allocation of arable land, it may be approaching or have reached the limits of its carrying capacity.  Climate change will put further strain on these constrained resources – making both water and food shortages difficult to avoid.  This will have two impacts – first significant resources will need to be reallocated from economic development to food and water security, and second it has the potential to significantly impact social stability as people become increasingly unhappy with water and food shortages and as the growth in living standards slows to deal with these difficulties.  The high levels of pollution in China are likely to add to the dissatisfaction of the Chinese population.  Examples in Eastern Europe and the Middle East have shown how environmental concerns have been a catalyst and conduit for uprisings.  For all of these reasons the Chinese Government has a significant incentive for dealing with climate change, by both encouraging global action to keep climate change within moderate limits and by implementing smart adaptation strategies to live within China’s shrinking ecological means.

This is the first in a two part series, a second essay will consider whether emission reductions will act as a constraint on growth, the interaction between international political considerations and China’s emissions reductions and resulting impact on China’s development.


This post is a modified version of an assignment completed for China in the World Economy, at the University of Sydney.  Lecturer Joseph Halevi.

The Economist, China’s peasants look to the skies: but the science of yields is unyielding, 20 May 2010a

Julie-Anne Richards
Consultant on all things climate change. 12 years work experience on climate for Climate Justice Programme, Climate Action Network International, Oxfam Great Britain and Oxfam Australia and CAN Australia. Before all of that I worked in marketing.